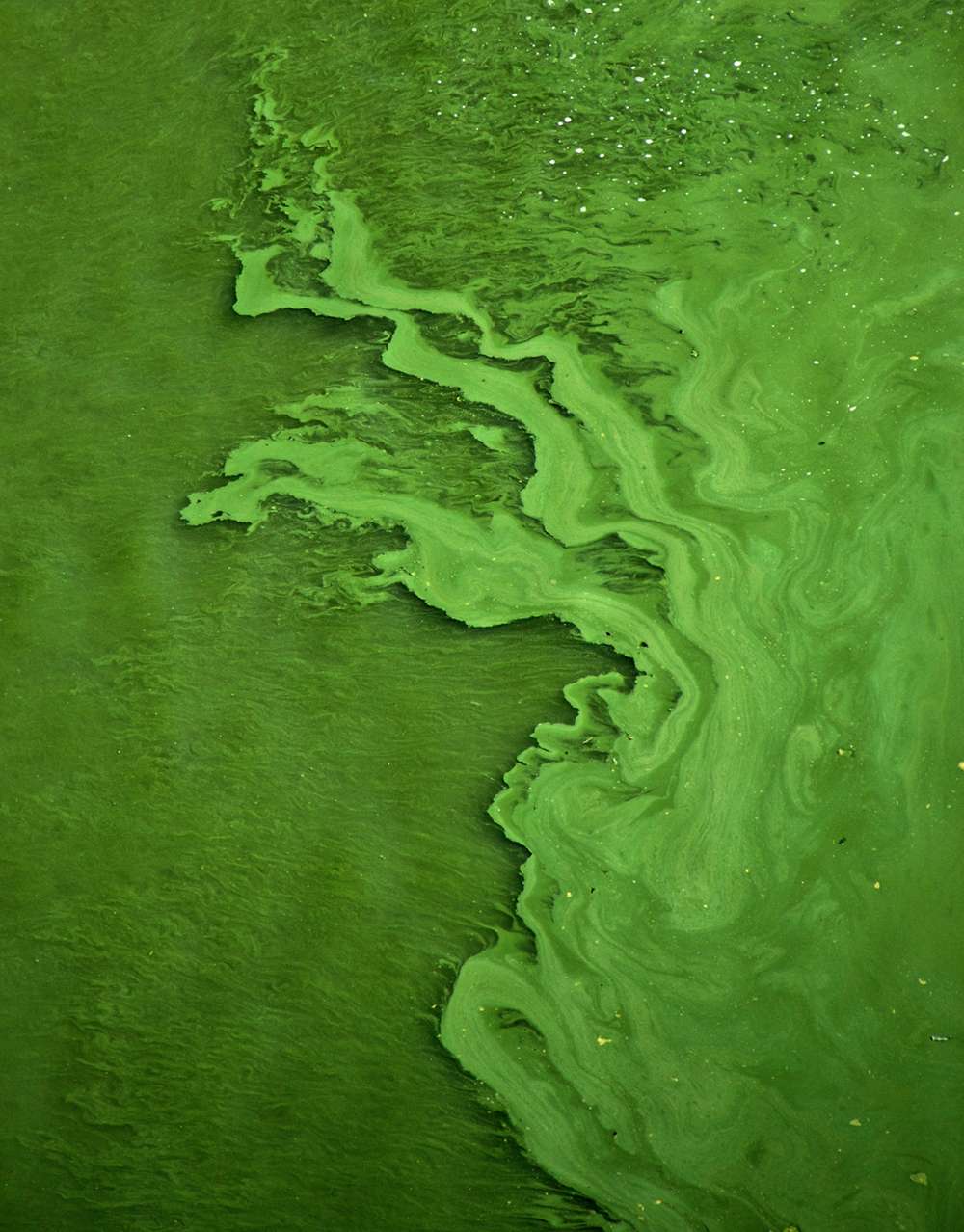 Separate studies determined that the lake primarily in Norton Shores was plagued with high amounts of phosphorous that, when released from the mucky lake bottom, caused excessive toxic algae blooms that severely degraded water clarity.

The eastern portion of the lake was treated with alum – a chemical compound that binds with phosphorous and sinks it to the bottom, essentially capping it.

“We’ve been working on this for 20 years almost,” said Don Trygstad, chairman of the Mona Lake Watershed Council. “It’s a slow process. I signed up to do this knowing it would take years and years and years.” The council, comprised mainly of lakefront homeowners, has been dedicated to combatting the algae – and raising funds to do so — since it formed in 2003.

Trygstad watched as HAB Aquatic Solutions, a company out of Lincoln, Nebraska, operated a barge filled with barrels of alum loaded off of three waiting tanker trucks finally gave the lake the treatment it needed. About 150 acres of the lake were treated, with more planned in the coming years if this week’s treatment proves as successful as expected and enough money can be raised. “The clarity will improve greatly,” Trygstad said. “You’ll see immediate impact.”

The algae blooms occur especially in hot weather and in some areas the algae presence can be 50 times higher than recommended for human contact, Trygstad said.

While the lake itself is located between Muskegon Heights and Norton Shores, its 45,570-acre watershed encompasses portions of Roosevelt Park, Muskegon, and the townships of Casnovia, Egelston, Fruitport, Moorland, Muskegon, Ravenna and Sullivan, as well as a small portion of Newaygo County.

Studies dating back at least to 1979 have identified the need to clean up the lake’s watershed and tributaries, primarily Black Creek and Little Black Creek. Though much of that work has been done at considerable expense, the phosphorous that was carried into the lake during years past has remained an unfortunate legacy in the lake’s mucky bottom.
Discharges from a former Muskegon Heights wastewater treatment plant ended when the plant closed in the 1970s. Similarly, discharges from the Muskegon County wastewater site into Black Creek were discontinued in 2010, according to a summary of a two-year study of the lake conducted by Michigan Technological University starting in 2017.

In 2015, structures were erected to limit migration of fertilizer-laden water from former celery farms east of the lake, another source of oxygen-depleting phosphorous, according to the study.

Following the Michigan Tech study, alum was determined to be the best treatment and the council went through a lengthy process to receive state approvals to apply it, Trygstad said.

The first treatment cost about $126,000, of which the council covered $65,500 and the city of Norton Shores paid $55,000. More than $14,000 came from settlement money collected from a defunct chemical manufacturing plant – which operated as Lakeway Chemical, Bofors-Nobel and Lomac – that polluted Black Creek.

The east end of the lake was chosen for treatment because it’s not susceptible to the influx of cooler waters from Lake Michigan, Trygstad said. We treated 150 acres of the 316 acres of lake that are 18 feet deep or deeper — or almost half the lake — were treated with a 50% dose of alum, he said.

Water sampling will continue in order to determine the extend of future treatments. At this point, the expectation is to continue treatments due to the success.