“We’ve been working on this for 20 years almost,” said Don Trygstad, chairman of the Mona Lake Watershed Council. “It’s a slow process. I signed up to do this knowing it would take years and years and years.”
The council, comprised mainly of lakefront homeowners, has been dedicated to combatting the algae – and raising funds to do so — since it formed in 2003.

Trygstad watched as HAB Aquatic Solutions, a company out of Lincoln, Nebraska, operated a barge filled with barrels of alum loaded off of three waiting tanker trucks finally gave the lake the treatment it needed. About 150 acres of the lake were treated, with more planned in the coming years if this week’s treatment proves as successful as expected and enough money can be raised. 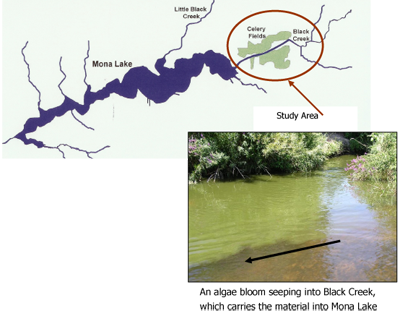 When the Annis Water Resources Institute conducted a study on the Mona Lake Muck Fields, aka, the “celery flats” (see map) we expected alarming news because we could see massive algae blooms oozing into Black Creek just upstream from Mona Lake (see photo).

Note how much higher the Muck Field TP results are on the graph then Mona Lake TP levels. Phosphorus levels in the flats are astronomically higher than what is considered biologically healthy.

The muck fields are shallow ponds, with an average depth of 1-3 feet. They were wetlands converted to celery production in the early 1900s. When the pumps that kept the fields dry stopped, the area flooded, and the nutrient-rich soils became a feast for blue green algae. The wetland system that would normally keep phosphorus in check was disrupted over a century ago and it has not been able to rectify itself. Reclaiming the healthy function of this wetland system is a major priority in the Mona Lake Watershed Plan.

The Michigan DNR recently stocked Mona Lake with over a thousand young Great Lakes Spotted Musky as part of the Native Species Restoration Program. The fish will reach legal, 42 inch size in four years.
The DNR intends to do four more stockings to establish a healthy population. The musky will eat shad, carp, goby, and alewives, creating more room for native perch, bluegill, and walleye.

This project was led by two students, Joel Coston and Andrew Johnson, in Sara Busken’s independent study ecology class. Through a grant we received from ERM Foundation, they coordinated the planning, design, and installation of a rain garden in the front of their school in an area that collects runoff from the circular driveway. The rain garden naturally treats the pollutants in the water, preventing them from entering the storm drain and nearby creek located to the east.